By Jim Turner - Inventor and Founder of OptibikeDecember 11, 2014July 7th, 2018No Comments

It was just over one hundred years ago that horses were still used for most transportation. Cars had not been invented and the horse was still the reliable form of transportation. President William Harding was the first president to use a car for his inauguration in 1921. With Henry Ford and mass production of the car, the use of horses for personal transportation quickly evaporated.

Prior to the car, the power of one horse was still considered of great value. Horses were used to plow fields, transport  families and pull carriages. They wee a vital part of each family and of industry.

One horsepower is 750 watts. On the average, at current electric rates. it costs $.07 to use (750 watts)  a horsepower for an hour. What can you get for that $.075? An electric bicycle can move you as speeds up to 25 mph for 1-2 hours. You can haul a trailer with 250 pounds on it and still achieve speeds of 20MPH. You can transport your groceries and a child, a keg of bear to a party or use it in disaster relief to go with no car can go.

So the power of one horsepower is hear again. Over 170 million people ride an electric bicycle each day in the world. Some out of necessity and many out of choice. The electric bicycle takes the common bicycle and makes it an amazing machine, much as a horse did for thousands of years. In the coming decades, I am sure that electric bike users will find as many creative uses for transporting items, as horsemen did in the past. 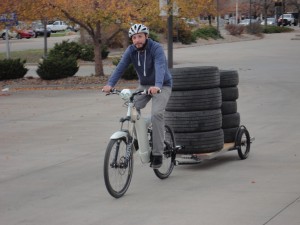