Optibike at the Steve Winwood Concert

By Jim Turner - Inventor and Founder of OptibikeNovember 23, 2012July 7th, 2018No Comments

By Jim Turner
Last night my family and I were invited to the Steve Winwood concert  in Denver. Steve’s manger, James has been an Optibike rider for many years and they provided us some great tickets in the center, just 8 rows back.

The views and sound were great. After the show, we met up with James and Steve backstage and I gave them both Optibike shirts. 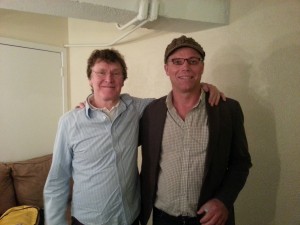 Steve and Jim Turner Back stage

James received his Optibike as a birthday present from Steve and  uses it to commute the 16 miles to the studio each day with 2000 feet of climbing. Lots of days of rain and drizzle as it is England.  It sounds like a great area in the north west of England.

I found Steve and I had several points in common. Steve lives on a 1000 acre farm, though mine is only ten acres, and our kids are about the same age.

What we don’t have in common is musical ability. I have none, and Steve is incredibly versatile. My music is designing electric bikes! James was talking about how great a new 1100 would be.

Riding the 160 mile Rimrocker trail on an Optibike