In this article we review the ranges for the Optibike R15C electric bike. The maximum range is 181 miles on a charge which makes the R15C the leader in long range touring. The tests show the ranges at 15, 20, 28, and 36 mph. Range tests are made with both pedaling and not pedaling. Optibike is the only company to list ranges with and without pedaling, and at all the different speeds, removing the uncertainty for determining how much the rider is pedaling in range tests on electric bikes.

The R15C is a very reliable and versatile E Bike, able to ride both on and off road. The five power level settings have unique power, torque and speed limits. It is like getting 5 bikes in one with incredible versatility. Whether tour riding for 180 miles or flying along trials at 36 mph, the R15C can do it.

Riders can use the ranges for pedaling and not pedaling to get an idea of how far they will be able to go in real life conditions. Optibike also does the range tests with a 220 lb rider, which is more in line with the average American rider. Many companies do tests with ultra fit 160 pound riders. Optibike also tests with knobby tires, which reduce range by 10-15%. Other companies test with ultra skinny road tires with high pressure. These tires are not practical and safe for the average rider. 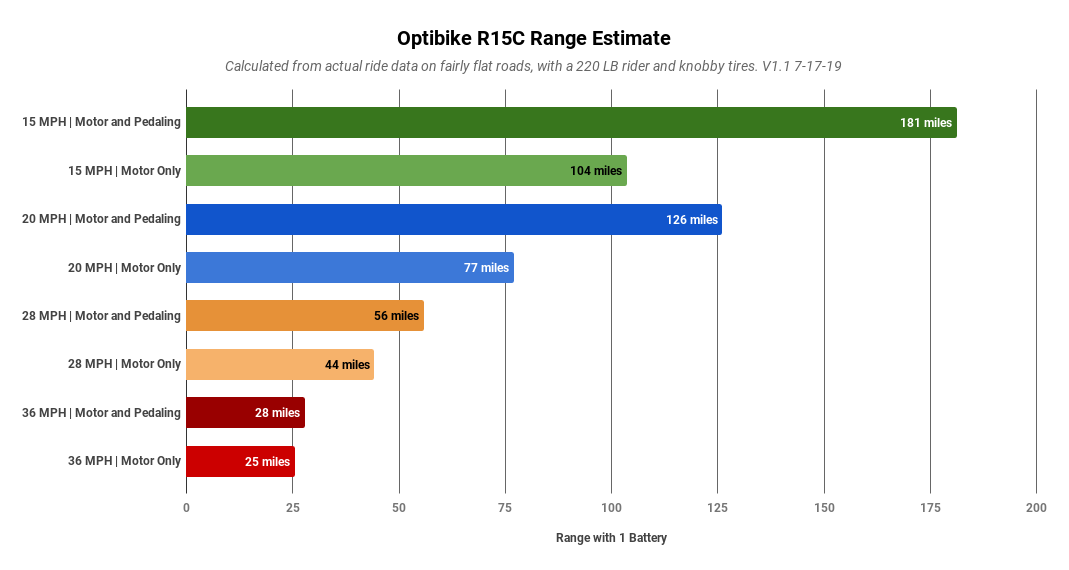 Riding at 15 mph with pedaling gives the longest range at 181 miles. If you ride at 15 mph without pedaling then the range is 104 miles. Most bike paths have a speed limit of 15 mph and so this is a great test for bike path riding. The R15C in Power Level 1 is limited to 15 mph and the test was done in this power level.  This is also the most subjective range, as it is essay to pedal at 15 mph and get infinite mileage. Tire friction is also a main factor at this speed, so a road tire would give a 10-20% improvement in range.

Riding at 20 mph with pedaling gives an amazing range of 126 miles. At 20 mph without pedaling the range is still an astounding 77 miles. The test at 20 mph is an important one as this is the speed limit for Class 1 and Class 2 E bikes in USA. In Power Level 3 the speed is limited to 20 mph, so test was done in this power level.

Riding at 28 mph with pedaling the range is 56 miles. If you do no pedaling the range is still 44 miles. At 28 mph wind resistance is playing a much bigger role. It takes twice as much power to overcome wind resistance at 28 mph versus 20 mph and 3.5 times the power of 15 mph. The speed of 28 mph is the seed limit for Type 3 electric bikes in the USA and this test was done in Power Level 4 which has a speed limit of 28 mph.

The speed of 36 mph is really flying and for off road use only, on private or OHV land. The range at 36 mph with pedaling is 28 miles and without pedaling 25 miles. You see the rider pedaling input has very little effect on range at this speed as it take so much power to travel at 36 mph. The R15C has a 36 mph speed limit in Power Level 5, so the tests were done in this power level. 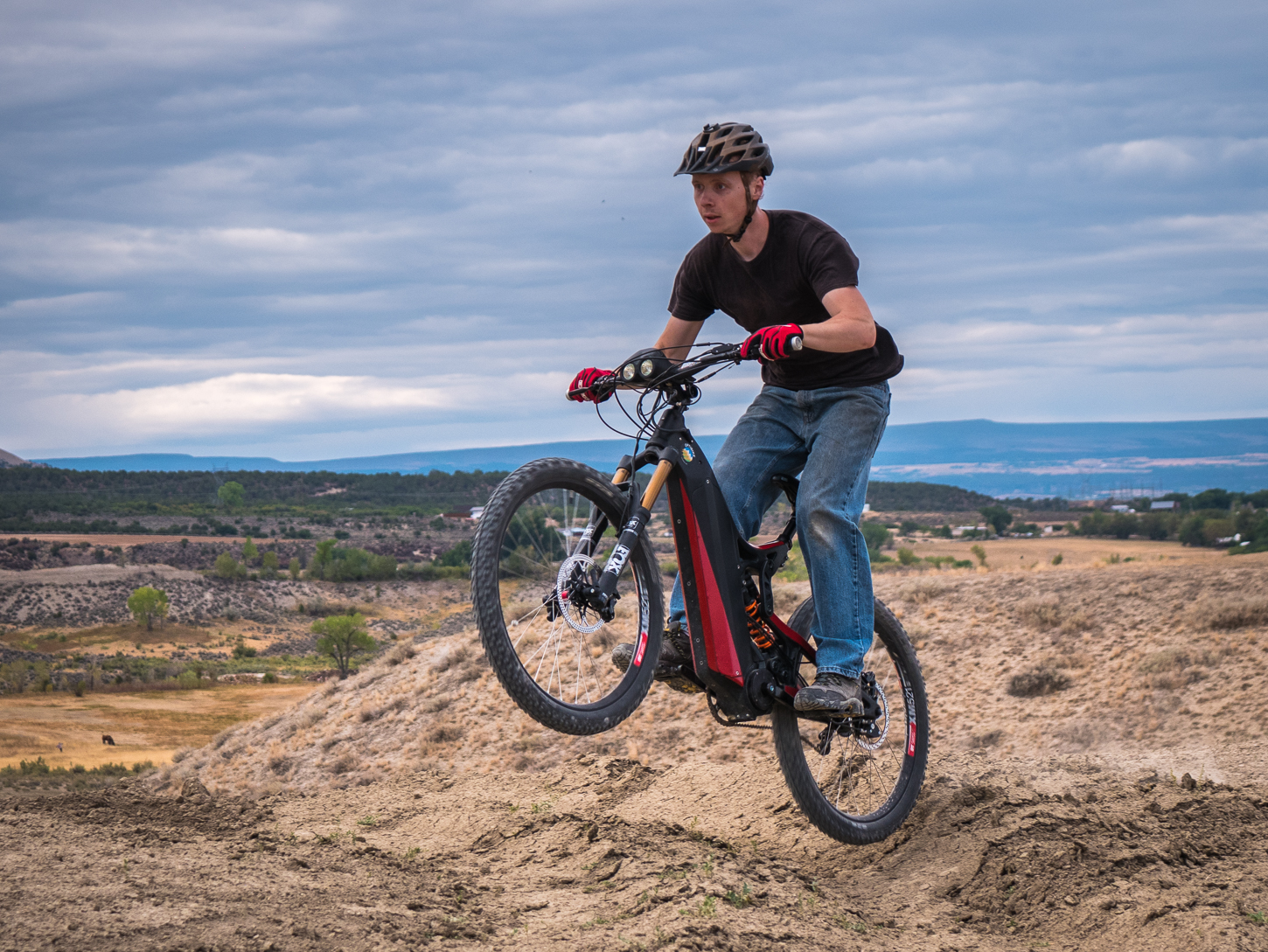 Pedaling Versus no Pedaling

In the chart you will see that tests were performed with both with pedaling and without pedaling. This gives a clear indication of range you can expect. At 15 mph, pedaling has a large effect on range, while at 36 mph pedaling has very little effect. This is due to the amount of power required to go 36 mph.  Due to wind resistance, the power required to ride 36 mph is 6X the power to go 15 mph. What is truly amazing is that the bike can go 104 miles at 15 mph without any rider pedaling! The range increases to 181 miles with rider pedaling, mainly due to the motor doing  little work as it is very easy to pedal at 15 mph without motor assist. In these test the rider is putting in about 100-125 watts of power.

The 3 Top Reasons the Optibike R15C has the Longest Range

The Optibike R15C electric bike has one of the largest batteries available and has 3X the capacity of the 2019 Bosch CX system. This results in longer ranges than any other bikes and eliminates range anxiety.

The R15C uses a German Made Rohloff 14 speed internal gear hub with a very large gear change of 540%. This enables the R15C to climb grades over 50% and still travel at 36 mph on the flat. The R15C is able to climb 12% grades at 16 MPH for almost one hour; an amazing achievement!

Another secret to the amazing range of the R15C is the Optibike designed and patented Motorized Bottom Bracket (MBB) drive system. The MBB has the highest power to volume ratio in the world and allows the bike to produce 5X the power of the Bosch CX motor in a smaller space. The MBB is designed and hand built in Colorado by Optibike. 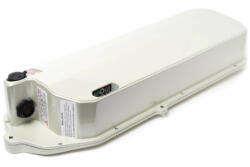 Factors that will affect your actual range

There are several factors that will affect the range you will actually get riding your R15C or any E Bike.  Therefore, your results may differ from the results listed here.

1.  Your weight. Your weight will affect the range because it creates more friction on the tires and if you’re climbing hills it will take more power to climb hills.

3. Tires. Tire choice tires will affect the range 10 to 20%. The full knobby used in this test are less efficient on the road surface. If you’re using a high pressure road tire you’ll get better range.

4. Road Surface: The road surface will affect the range. If you’re riding on a smooth asphalt road will get better range than on a gravely road or dirt road.

5. Body Size and Clothing: A larger body has more frontal mass and will reduce range as will baggy clothing that catches in the wind.

6. You Pedaling Power: If you are able to put in more pedaling power, your range will increase. 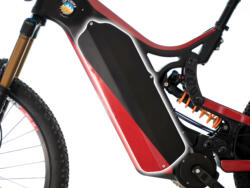 8. Temperature: Temperature affects the range. These tests were done at 80 degrees Fahrenheit. If it’s very cold you will get less range than in these tests as the battery is less efficient when cold.

In Power Levels 1, 2 and 3 the R15C is a Class 2 Electric Bike. This means that it is limited to 20 miles per hour and 750 watts. In most states a Class 2 E Bike is allowed on bike paths. Consult your local laws as all states and cities have varying laws.  Power Levels  4 and 5 are for off road use only.

Five Bikes in One

The Optibike R15C has different speed limits, power limits and torque limits in each of the five Power Settings. This makes the bike have five  completely different personalities, which gives you lots of variations in riding, all on the same bike. 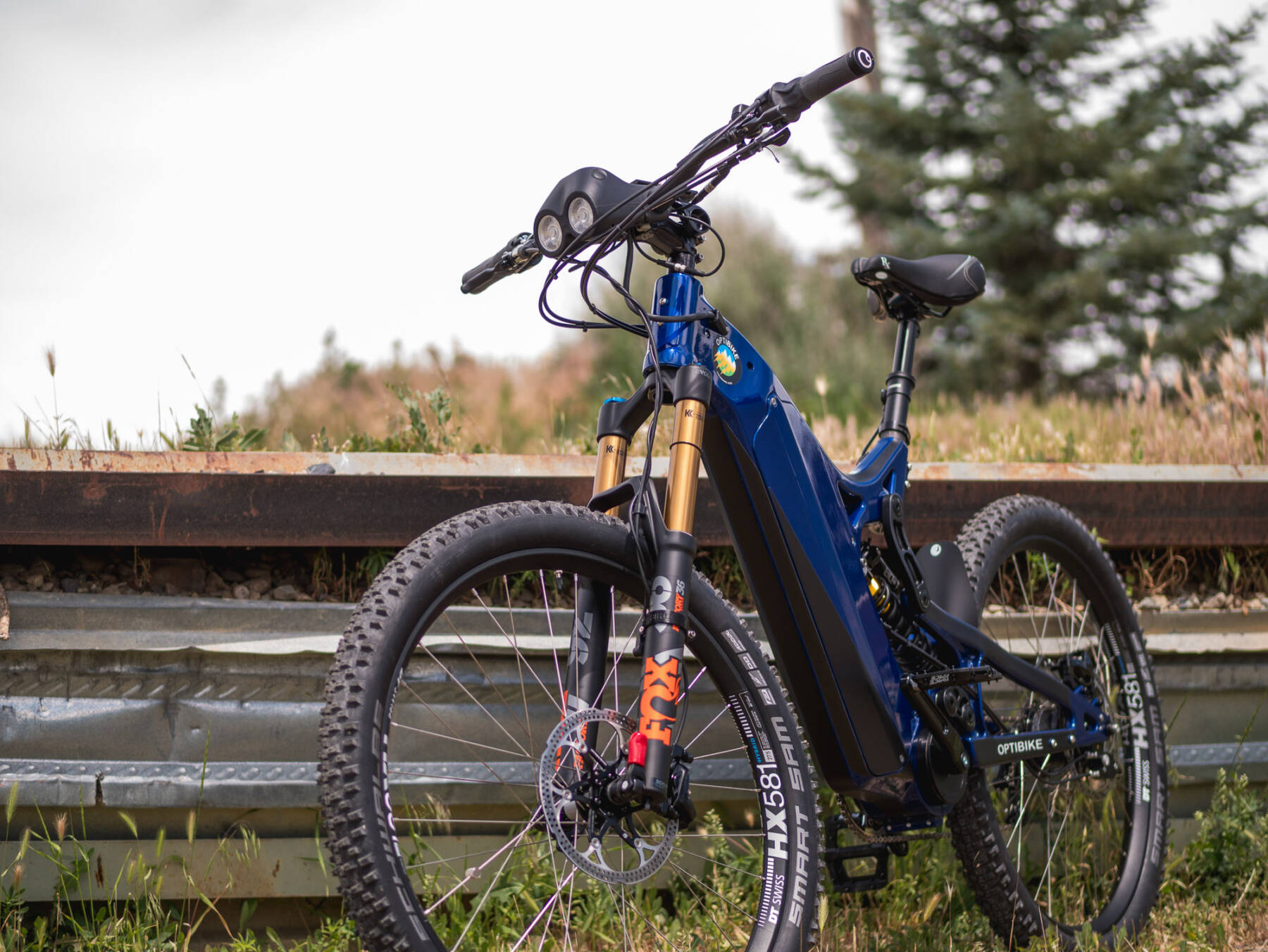 Optibike builds the worlds leading high  performance electric bikes one at a time in the mountains of Colorado. As the oldest maker of electric bikes in America, Optibike is dedicated to quality, performance and hand built quality. Each bike is built to customer specifications and is an incredible experience to ride.

Jim TurnerApril 18, 2019
Blogs by Optibike TeamHow do we do it?Optibike News

Jim TurnerOctober 23, 2013
Blogs by Optibike TeamFitnessHealthHelia - The Electric Bike for WomenHow do we do it?

Get the latest Optibike News and Sales