Kyle (Production Manager at Optibike) here just letting you know about a really fun ride I did the other weekend. Originally I had planned to ride the Pikes Peak, Assault on the Peak 2012, like I have done the previous two years with the rest of the Optibike Team.  However to my disappointment, this year the Assault on the Peak course had been drastically cut short of the previous years that started in Manitou Springs.   So I opted to ride with Brooke, my girlfriend, from Idaho Springs to the top of Mt Evans.  I figured it would be a fun untimed/ unsupported ride that would be more suited for the Optibikes abilities and efficiency, rather than the much shorter Pikes Peak ride.  On top of that, I felt it would be cool to have Optibikes summit two 14ers on the same day (Mt. Evans and Pikes Peak).

I found this ride at http://www.mountevans.com/MountEvansCom/Mount-Evans-Things-Bicycling.HTML where it lists all sorts of statistics about the ride.  The ride that is talked about on the website is a 30-mile uphill route involving an elevation gain of 6,724 feet.  We ended up starting about 4 miles in due to parking and not being able to find the Clear Creek Middle School.  I was not disappointed by this because the first 4 miles are really easy anyways and we found a great spot to unload the Optibikes by a creek.  So in total our ride would be approximately 52 miles round trip with about 5600ft of elevation gain (based on website).

We got a late start compared to our early morning Pikes Peak comrades due to Brooke fighting a cold and us enjoying sleeping in on the weekends, so the weather was definitely something we were keeping our eye on as we continued to gain elevation.  Note: this is not a ride that should be done when feeling ill but with the Optibikes we never felt committed to the route if one of us did not feel well, because we could always turn around and ‘motor’ back to the truck.

It was nice having the Topeak bag on top of our external batteries because it allowed us to bring layers and water without having to wear a backpack.  These extra clothes came in handy as the wind picked up and the temperature dropped.  As you can see Brooke started the ride with a tanktop but that would soon change as the miles ticked away.  It was not long before we arrived at the Mt Evans entrance station, and by then we had both already layered up.

On the website it says to allow 3-4 hrs to complete the trip to the summit from Idaho Springs but with the Optibikes we were going 20+ mph uphill at times and the miles quickly ticked away.  It is a great feeling to be riding and getting a good workout in and just putting away miles like you are a pro cyclist.

We stopped, took water breaks and enjoyed the view without worrying about losing our momentum, as the MBB seems to be a gravity neutralizer while riding in the mountains! We were riding above treeline for awhile when Brooke began to get chilled and did not want to risk making her cold any worse as it was slightly drizzling.  The clouds above the peak were getting dark as well, so Brooke turned around and we decided to meet at the diner near the Mt Evans entrance station where she could warm up.  At that point we were about 6 miles from the summit, I told her I was going to assess the clouds for a bit and if I saw it clearing up I was going to attempt the summit.  After a few minutes the drizzling stopped and the clouds lifted a bit so I turned the throttle and kept gaining elevation.  About 1.5 miles from the top I rode by some mountain goats with their little baby.  I quickly video taped them and  then continued on.

Soon I was at the summit enjoying the view that only a 14000+ foot mountain can provide.  All of it provided by the Optibike, and a little leg churning. 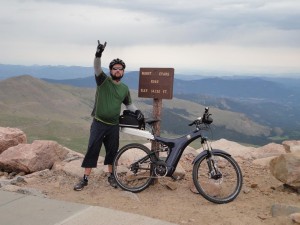 I chatted with a nice couple from Denver at the top who inquired about the Optibike and who took the above picture.  They said they saw us on the way up and thought the Optibikes had to be electric because of how fast we were going.  In all, it took about 1.5hrs to get to the top but that is just a guess as I was not really concerned about time but more about the experience and views.

I put on another layer for the descent and pointed the wheel down, keeping an eye out for the mountain goats.  It was an awesome experience descending above treeline with big crows souring next to you at 40+ mph.  It was not long at all before I met up with Brooke at the diner, refilled the water bottle and we were both headed back to the truck.  After loading up the Optibikes, we stopped at Tommy Knocker for some post -ride food and beer.  After discussing the ride we decided we are definetely going to do this ride again when she is feeling better so that she will get a chance to summit (weather pending of course).  Regardless we had a great time and got a good workout in.  I hope this will inspire you to find a ride that you normally might not do and do it anyways.