Amazing Story from the UK

This story came to us from Optibike owner Paul C.- Wow.  Thanks for the inspiration Paul.

Occasionally in life, we make a discovery, either after extended research and design, but more often by sheer luck and chance.  Even more rarely, can these discoveries have a huge effect on ones life.  For me, finding Optibike  was a function of all of the above.  It would not be overstating it to say, Jim, the guys at Otibike, and their bikes, revolutionized my life.

In 1988, at the age of 16 I was in a severe road traffic accident.  While initially being lucky to have survived, the damage to my legs was going to be life changing.  After a year or so in hospital, having undergone nearly 30 operations, involving skeletal and vascular reconstruction, I was left with a fused left knee and a greatly weakened lower right leg, with inverted foot.  Walking was, and still is particularly painful.   For 22 years, I limited my physical activity to that which was wholly necessary.  But, by now my world had changed, for the better; I was married with three active young sons.  I needed to be able to do more.

Andrea my wife had heard about electric bikes before, but having experimented briefly, they had proven unsuccessful. Andrea forced me to keep looking, she knew it would be so good for me, and as usual, she was right.  It was during an extended session of google searching, I discovered Optibike, probably on the 17th page of the Google search, buried in some obscure article – Jim you really need to improve your marketing!!!  I read what I could about the bike, and started to wonder could this be a solution for me?  So, giving a brief history of myself, I sent Craig Taber, the only contact name I could find, an email looking for more details. Of course then, I needed to understand how powerful it was, was it big enough for me (I am just under 2metres tall), what, if any, solution could there be for my unbending left leg?

Late one evening (London time) Jim called me up.  We spent nearly an hour discussing my physical abilities, together with the capabilities of the bike. In addition, what else I needed the bike to do.  Jim said he needed to go away and think about it.  After 6 weeks of thinking, experimenting, having his engineers try to re-enact what it would be like for me to ride the bike by strapping broom sticks to their legs, Jim called me back with the solution.  Jim redesigned the left peddle crank, lengthened it a touch, but more importantly, housed into the crank a baring system that would let the pedal to hang freely, thus allowing the left foot to rest on it as I pedaled with my right leg.

November 2010, This amazing red bike arrived.  Indeed, the New York Times description as “The Ferrari of electric bikes” could not have been more fitting!  Not only was it fast and functional, but it look fantastic!  So, why is this so revolutionary?  Suddenly I could do more with my boys, Sam Tom and Charlie.  We could go riding in the park as a family.  A small thing to most, but to me this was huge.  In addition I had something that I could use as a source of rehabilitation. 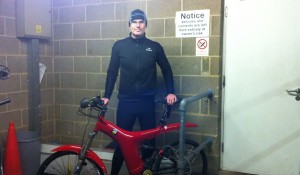 Optibike owner Paul C. from the UK, with a bike modified to be pedaled with one leg.

I was somewhat reticent early on.  It had been 22 years since i had been on a bike, so I was nervous about myself, never mind having to make sure the boys were safe also.  But I soon got over that. As they say, “its like riding a bike”…. My two oldest were riding solo, but my youngest was on a “tow-along”, attached to the seat post on my bike.  The Optibike dealt with this beautifully, providing ample power to pull Charlie along, with limited help from me pedaling.

It wasn’t long until i got very brave and decided to ride the bike to work, 11 miles away.  That was nerve-racking.  It is one thing to ride through the country roads of Ireland, where i grew up, versus the hair-raising commute through one of the busiest cities in the world.  Fortunately, the first third of the journey is through the picturesque Richmond Park – which is right beside my house.  Early on a Summers morning, circa 5:30 am, when no cars are allowed in the park, this is just the most stunning place.  In Winter when it is cold and dark, it is beautifully eerie.  You would be surprised at how much cycle traffic there is in the park at this time.

The route takes me through the park, down to Putney, over the Thames, along the Kings Road through Chelsea, to Victoria, around Buckingham Palace, up St James Street into the heart of Mayfair, where I work.  This takes approximately 40 minutes.  My personal best is 34 minutes!  The route home is slightly different, in that I go through Hyde Park, trying to avoid heavily congested roads.  After some weaving through side streets, I end up back on the Kings road, and retrace my route in from there. On average this is closer to the 55 minute mark, sometimes even over an hour. I was very surprised as to how much, as a cyclist, you are still very affected by road traffic.

The ride home is many ways is so much more interesting, but not for the reason one would think.  Every day I get a range of gasps of astonishment  “how a guy pedaling with one leg can go so fast”, to “wow”, what is that thing.  London is awash with cyclists right now, no bad thing at all. They are a very collegiate bunch, but I might have upset the natural order somewhat, I am not supposed to able to keep up with them, as they flood in waves of fluorescent yellow down the Kings road, and over Putney bridge.. etc etc…On occasion I have the afrontary to actually over take them.  But as the cyclists gather as the intermittent read traffic lights, the questions inevitably start.  What is it?  Where did you get it?  I couldn’t understand how you were going so fast?  What Speed does it do? (that was from a guy on a motorbike!!).  But uniformly there is nothing but respect shown for the bike.  I have a sense of pride when I am os is n it, but also a sense of normality, being able to do something that is pretty much natural for nearly everyone else.

Over time, as I continue on this daily trip I have been trying to use my leg more and the engine less. Nearly a year and half later, I would estimate I have completed that round trip 40 times or so.  Looking back, I would like to think I had done it more often, but multiple factors have prevented that.  That said, my leg is getting stronger, and general fitness greatly improved. However, it would be 100% impossible for me to complete this commute without the Optibike.

In 2010, a friend and I decided we wanted to do something, raise money for cancer, we both knew people who had suffered, including my mother.  We came up with a very ambitious idea.  In 2011 we would both be 40 years old, so lets cycle from London to Monaco, and raise as much money we could.  This was to be 1000 miles over 2 weeks.  Very ambitious, but nonetheless a goal.  Not long after we hatched this plan, my friend Jeremy, as fate would have it, was diagnosed with cancer himself.  Needless to say, this put our great opus on hold.  We are over year later now and the great news is that Jeremy has completed his treatment, and is recovering very well.  So,  we have started hatching another plan.  This time, however, we are being a touch more realistic about what we could actually achieve.  We have joined an event organized by The MacMillan Trust, riding from London to Paris. 500 kilometers over 4 days. It is still a big “ask”, but with more concerted effort and training, I think we can do it, raising money for Cancer related charities.

In signing up for this, I had questions both about my own ability and that of the bike.  The former, I can hopefully answer, but as for the latter, I had to go to the Oracle himself.  With his usual energy and vision, Jim allayed any fears I had from a mechanical perspective and has pledged his support in my endeavor.  (I know he is already toying with ideas regarding extending the power supply I will need to complete the ride).

Some may think I am cheating a little, but rest assured, without Jim, the guys from Optibike and indeed my two wheeled Ferrari, such an adventure would never be possible for me. Optibike has not only improved my quality of life, but has given me new goals.  Thanks Jim, thanks guys.