Skip to main content
Close Search
How do we do it?Jim's BlogNewsletter Archive

Electric Motors have Peak Efficiency at a Single RPM Only 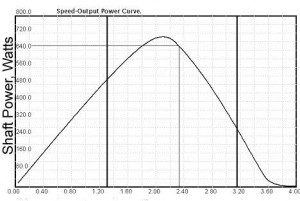 The graph to the right shows output power graphed against motor speed for a DC motor of about 600 Watts output. Power is on the vertical axis, motor rpm is on the horizontal axis. Power and efficiency are a  maximum in the middle of the graph at 2300 RPM. Power is lower at both lower RPM and higher RPM.

The Reason  Hub Motors Cant Climb Hills
In a hub motor, motor rpm is directly proportionate to bike speed. This means the hub motor is only reaches maximum Power and efficiency at one motor RPM and wheel  speed. In this example that would be 10-15 MPH. At lower speeds when climbing hills, the efficiency and available power drops steeply, as it does at higher speeds in the 25 MPH range. A hub motor is very similar to a bike with one gear, good at one speed, but not good at changes in terrain, such as hills. 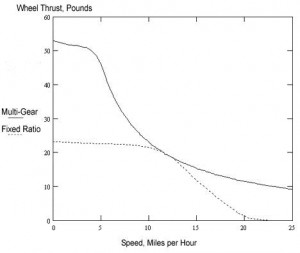 The next graph shows thrust at the rear wheel plotted against speed for a single speed hub drive and a multi-speed mid-drive. Both motors have identical performance characteristics.

Motor power is converted to thrust at the rear wheel and that is what actually pushes the bike forward. The more you have, the faster you accelerate, the steeper hill you can climb, and the faster you can go.

You can see from the graph that except for the one speed where their effective gear ratios match, the MBB drive ALWAYS generates more thrust than a hub motor. And remember, the motors are identical, so the graph is just showing the effect of gearing. Also note that at lower speeds, where you’ll be when climbing hills, and at higher speeds, the geared system produces several times the thrust of a hub drive.

That’s why an Optibike MBB can outperform hub motors with several times the power. 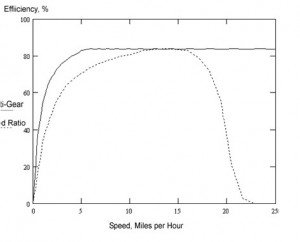 Finally, the last graph plots motor efficiency against speed. Again, you can see that the Optibike MBB is always more efficient in the critical low and high speed ranges.

Don’t dismiss the importance of efficiency by thinking somehthing like “Oh, I’m not climbing hills very often so I can live with a little less range”. When a motor is operating in an inefficient speed range the power that’s not going to the wheels is going somewhere. In this case, it’s going into heat in the motor windings.

Many a rider has discovered to their chagrin that their expensive hub motor overheats and shuts down on a long grade.

Why we build the Optibike Elite Series one at a time

Optibike Electric BikesOctober 26, 2021
How do we do it?RxC Full Carbon Series

Jim Turner - Inventor and Founder of OptibikeJuly 18, 2019
Ask Optibike!How do we do it?RxC Full Carbon Series