The summer on the Optibike

It’s been a great summer on the Optibike 1100R-Pro, a special variant built for use in professional racing and training settings!  Having now had world and national champions “on the wheel” of the 1100R-Pro, both on the road and in velodromes, we’ve continued to prove the professional potential of our patented mid-drive technology on a global stage.  Our most recent outing was at last week’s  NoBo Classic, on the iconic racecourse that was the final stage of the Coors Classic (then known as the North Boulder Park Criterium).   Optibike had a ‘tent’ in the pavilion area, but more importantly provided a couple of Optibikes for use by course marshals to zoom around on, checking on corner guards, ferrying water, etc….  One even had this cool flatbed trailer, which could move needed materiel around the ‘parcours’ (race-course). 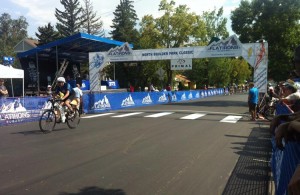 My involvement on the 1100R-Pro was entirely en’parcours’, serving as “Moto1” (the lead motorcycle that marks the front of the race) in several different heats, from novice to professional.  The most interesting, and technically notable, was the Mens Pro-1/2 Category where the 1100R-Pro served both as pace bike for neutral starting laps, and then as a mobile camera platform, “embedded” in the race.  After the neutral lap, I tucked in behind the peloton to capture the action with a Go-Pro camera, alternating fore and aft views.  20 minutes into a 70 minute race, a breakaway group formed. so I nicked in behind the break.  After lapping with the leaders for 20 minutes or so, I slipped the 1100R-Pro back in behind the main field, and finished the race there.

This event actually proved 2 things; first, it’s more than fast enough to stay abreast of, or in front of, a professional race.  The Optibike 1100R-Pro performed brilliantly, moving easily amongst the riders, safely navigating technical, high speed corners, and maintaining safe margins around the riders. This has great implications for racing, as it foreshadows the eventual elimination of vehicles with combustion engines as the only choice as adjuncts to professional bike racing. Secondly, due to unexpected electrical limitations at the announcer’s stage, I was unable to recharge the bike between heats.  So, I had to manage the day’s activities on a single charge of the 1100R-Pro’s lithium-cobalt battery.  My day began at 8:00AM and concluded at about 3:30 PM,  on a single charge!  Now, I wasn’t on course the whole time, and while I was I was throwing a lot of wattage at the pavement with my legs.  But much of it required very little motor assist.

My first ride on an Optibike was on a velodrome, and I have to say I felt a bit like Chuck Yeager…I had no idea how it was gonna end!  But, it not only ended well, it wildly exceeded my expectations.  It was no different at the NoBo Classic; would it be able to perform?  Then answer was “yes, in spades!”, and  I was again impressed at the capability of this hybrid-electic bicycle I’d been riding for more than a year. Pacing is sort of a unique job in cycling…it requires a solid vehicle and a solid rider.  You have to be able to navigate amongst professionals on their terms.  The Optibike 1100R-Pro will no doubt continue to exceed our expectations and those of the professionals we use the bike with!

Next up?  The new Boulder Valley Velodrome opening in October!